A downloadable game for Windows and Linux

A Touhou Project fangame in the style of the PC-98 games following the rise of Remilia Scarlet.

Just over four years ago, Reimu, the Hakurei shrine maiden, took down Shinki, the ruler of Makai, while resolving the Mystic Square incident. The youkai of Gensokyo, fearful of this obscenely powerful shrine maiden, could no longer bring themselves to even think about starting an incident. Their motivation and spirits plummeted drastically as most of the year went by without any new incidents occurring, putting the balance of Gensokyo at risk.

At the end of that year, a western mansion was spirited away into Gensokyo, bringing with it its youkai mistress, the absurdly powerful Remilia Scarlet. The youkai were quick to take to her as a bastion of hope against the shrine maiden. Now, incidents are happening left and right, some minor, some devastatingly major. People have tried to usurp the vampire countless times, but every single combatant has found themselves easily outmatched by her... if they ever met her.

The year is now 2003. This war has gone on long enough. It's up to some of the most powerful youkai in the land, including the devious Yukari and the strong-willed Meiling, along with the shrine maiden of paradise herself, Reimu Hakurei, to defeat the vampire's army and repair the balance of Gensokyo. Or... perhaps you'd prefer to join in the chaos with the vile flower youkai Yuuka and the ever-malicious evil spirit Mima?

Or maybe you just want to loot the mansion alongside Marisa. That works too.

About the One-Stage Demo

This is an early prototype demo of Devil's Emergence that only contains one stage (Meiling's stage 1). This is to act as a proof of concept and to help track down any bugs before any later stages complicate matters. Some features may be buggy, incomplete, or missing entirely (even the soundtrack features a set of placeholder recordings). I would greatly appreciate your feedback!

I intend to release a standard trial version with three stages per character later this year.

For more information, please look at the documentation included in the download.

Unfortunately, these controls aren't configurable in-game yet. You can still change them in `options.toml`, which is created the first time you run the game.

U2 — Original composer for Fragrant Plants

This is a Touhou Project fangame. This game is not affiliated with or endorsed by Team Shanghai Alice.

Unzip the game into its own folder, then... 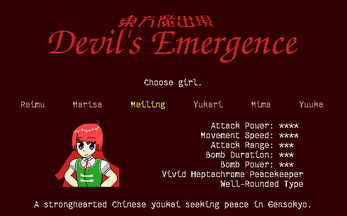 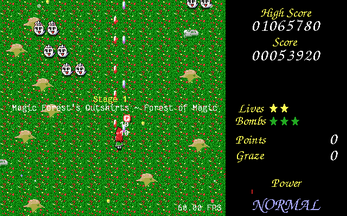 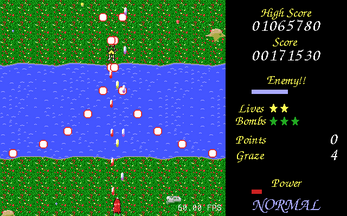 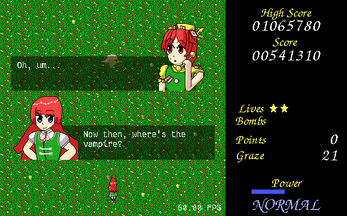